Why you shouldn't nuke a hurricane

This intriguing backstory appeared in this morning's Washington Post.
Trump denies that he suggested nuking hurricanes. But the government once studied the idea.


In October 1935, roughly six weeks after a devastating hurricane laid waste to the Florida Keys, a group of frustrated chamber of commerce executives from the storm-battered cities of Miami, Fort Lauderdale, and Hollywood, Fla., got together to figure out what could be done about storms that mercilessly pounded the state’s coast every fall, threatening the burgeoning tourist economy.


The solution they landed on was a novel one, and, conveniently, it didn’t require anyone to move out of harm’s way. Instead, the executives suggested, the government should simply try bombing hurricanes before they got to Florida.


“These storms are not only local menaces,” Clyde Elliot, the secretary of the Hollywood, Fla., Chamber of Commerce, reasoned. “They reach Newfoundland frequently before they disburse, hence this control is really of national importance.”


While their proposal didn’t gain any traction, it wasn’t the last time the idea would come up. On Sunday night, Axios reported that President Trump has repeatedly urged senior Homeland Security and national security officials to explore the possibility of using nuclear bombs to diffuse hurricanes before they reach the United States, which would make him the latest in a long line of politicians (and coastal property owners in Florida) who have suggested fighting storms with military force.


Early Monday, Trump denied ever pushing for the use of nuclear bombs against hurricanes, tweeting that the Axios story was “ridiculous” and “Just more FAKE NEWS!”


The story by Axios that President Trump wanted to blow up large hurricanes with nuclear weapons prior to reaching shore is ridiculous. I never said this. Just more FAKE NEWS!


Regardless of Trump’s feelings on the subject, the idea of hurling bombs in the path of incoming storms was once given serious consideration. Just weeks after the U.S. dropped the first atomic bombs on Hiroshima and Nagasaki in 1945, Floridians started wondering if the same destructive force that had ushered in the end of World War II could also be leveraged to protect beachfront property. Herbert A. Frink, the mayor of Miami Beach, wrote a letter to President Harry S. Truman urging him to look into it, while members of the Lee County Commission in southwest Florida voted to offer the government a 7,500-acre tract that could be used as a launchpad, historian Gary R. Mormino writes in “Land of Sunshine, State of Dreams: A Social History of Modern Florida.”


But scientists quickly poured cold water on the idea. The Florida officials had been encouraged by reports that when the atomic bomb was tested in the New Mexico desert, nearby storm clouds had disappeared. But one meteorologist pointed out that there was no evidence that those two events were connected. Another warned that dropping a bomb in the middle of a hurricane could potentially make the storm even worse.


Then, there was the fact that atomic bombs weren’t exactly easy to come by. When the question was raised again in 1950, not long after the Korean War broke out, Grady Norton, the chief forecaster for the U.S. Weather Bureau (now the National Weather Service) in Miami, cautioned that “this is no time to waste bombs on hurricanes.”


“The real problem facing us today,” he told the Fort Lauderdale News, “is not ways to eliminate hurricanes, but instead the job of educating people to take full precautionary measures when a storm occurs.”


That logic evidently fell on deaf ears, because the advent of nuclear weapons prompted a new round of speculation by the end of the decade. Though the atomic bomb killed hundreds of thousands of people in Japan, the amount of energy it yielded was negligible compared to a mature hurricane, Jack W. Reed, a meteorologist at Sandia National Laboratories, explained in a 1959 paper. Nuclear weapons didn’t come close, either, he wrote, but a massive amount of air was lofted skyward when the hydrogen bomb was tested. If a submarine were to lob a nuclear missile at the eye of a hurricane, he theorized, the warm air fueling the storm would be lifted into the stratosphere. The hurricane might not come to an immediate stop, but at least it could be weakened or slowed.


This time, government officials appeared to take the idea into consideration. During a 1961 speech at the National Press Club, Francis W. Reichelderfer, the head of the U.S. Weather Bureau, revealed that the agency planned to study whether bombing a hurricane would stop it in its tracks.


Asked specifically about nuclear weapons, the meteorologist replied that they “might do something to a hurricane, but he wasn’t sure if it would be good or bad,” the Associated Press reported. It wasn’t unthinkable that someday, the agency would hurl a nuclear bomb at a storm while it was still far from land, he said, but there were some major obstacles. Tests would cost millions of dollars, and the government needed to learn more about the potential side effects first.


Needless to say, those concerns won out. The FAQ section of National Oceanic and Atmospheric Administration’s website now includes an explainer about why nuking a tropical storm before it develops into a hurricane is “not a good idea.” It’s quite possible that dropping a nuclear weapon would have no effect on the storm whatsoever, and, even more pressingly, that the storm’s winds would carry radioactive fallout to land, the agency explains. And, as National Geographic previously pointed out, doing so would mean running afoul of the Peaceful Nuclear Explosions Treaty, which the United States and the former Soviet Union ratified in 1990.


But like clockwork, the question seems to resurface every few years. In 2004, during a particularly deadly hurricane season, Mary Aiken, an elected member of the Hernando County, Fla., commission, called on NASA to find a way to stop the storms before they could reach Florida, and likened Mother Nature to a terrorist.


“These storms infuriate me,” she said, according to the Tampa Bay Times. “There must be something that can be done. It’s like a war. This state looks like Iraq.”


Informed by the county attorney that government scientists had researched that question before, only to realize that they ran the risk of combining a hurricane’s powerful wallop with deadly nuclear fallout, Aiken wasn’t satisfied. The agency, she declared, simply hadn’t been trying hard enough. 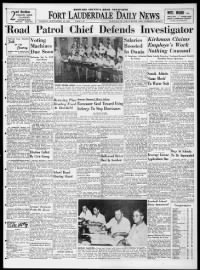