Tested to destruction; two historic blasts, one of hope, the other deep despair: both on 16th July

In the past week the media has been rightly swamped by articles and films  looking back on the most amazing human exploration in history: when three men were transported from Earth to our nearest heavenly body, the Moon, some 240,000 miles away- and back again safely.(https://www.nytimes.com/spotlight/apollo-11-moon-landing; https://www.nytimes.com/2019/07/13/science/apollo-moon-nasa-engineers.html).
The three American astronauts  -representing all humanity- Neil Armstrong ( the first human to step on another planetary body), his fellow moonwalker Buzz Aldrin and Command module  pilot Michael Collins, famously blasted off on top of their Saturn V rocket at 1.32 pm GMT from Cape Canaveral (Kennedy) on 16 July  fifty years ago today.

But twenty four years to the day before in complete secrecy- compared to the  global media splurge that accompaniedd the manned Moon visit adventure -  the US Government detonated the first ever atomic bomb, at a  secret site near Socorro, in New Mexico desert. This was a very different blast.

The story has been told many times, not least in the 1962 book 'Now it can be told' by General Leslie M. Groves, the feted military man - who along with scientist, Robert Oppenheimer - who designed the atom bomb in the clandestine Manhattan Project.

But this week a new and worrisome interpretation of the deadly effect on Americans living in ih e near vicinity of that first atomic test is published in the internationally renown journal, the Bulletin of the Atomic Scientists, by two very experienced adiation risk researchers (one posthumously)

The story befits  being included in  wider account of the disastrous effect of atmospheric tests, that resulted in the US military endangering its own citizens to  save them….it chillingly fits into the description "Killing our own."

Here is the full article:

Trinity: “The most significant hazard of the entire Manhattan Project”

A senior scholar at the Institute for Policy Studies, Robert Alvarez served as senior policy adviser to the Energy Department's secretary and deputy assistant secretary for national security and the environment from 1993 to 1999. During this tenure, he led teams in North Korea to establish control of nuclear weapons materials. He also coordinated the Energy Department's nuclear material strategic planning and established the department's first asset management program. Before joining the Energy Department, Alvarez served for five years as a senior investigator for the US Senate Committee on Governmental Affairs, chaired by Sen. John Glenn, and as one of the Senate’s primary staff experts on the US nuclear weapons program. In 1975, Alvarez helped found and direct the Environmental Policy Institute, a respected national public interest organization. He also helped organize a successful lawsuit on behalf of the family of Karen Silkwood, a nuclear worker and active union member who was killed under mysterious circumstances in 1974. Alvarez has published articles in Science, the Bulletin of Atomic Scientists, Technology Review, and The Washington Post. He has been featured in television programs such as NOVA and 60 Minutes.
Kathleen M. Tucker (1944-2019) was president of the Health and Energy Institute, where she organized national and international conferences about radiation and the law. She also published several reports regarding nuclear waste processing and disposal, uranium mining, and occupational hazards at private nuclear sites. She was best known as a public interest lawyer who helped raise national awareness of the case of Karen Silkwood, a nuclear worker and union activist employed as a technician at a plutonium fuel fabrication plant in Cimarron Oklahoma owned by the Kerr-McGee Corporation. On November 13,1974, she was killed after her car hit a culvert on her way to meet with a New York Times reporter. Tucker went on to organize a lawsuit on behalf of Silkwood’s family, which found Kerr McGee liable for contaminating Silkwood’s home. The decision was upheld by the US Supreme Court. Since then numerous books, articles, documentaries, and a critically acclaimed Hollywood motion picture have focused on the circumstances surrounding Silkwood’s death. Tucker also represented victims of human radiation experiments by the nuclear weapons program and brought to light hidden overexposures of US nuclear weapons workers, revelations that helped in the enactment of the Energy Employee Occupational Illness Compensation Program Act.
For the past several years, the controversy over radioactive fallout from the world’s first atomic bomb explosion in Alamogordo, New Mexico on July 16, 1945—code-named Trinity—has intensified. Evidence collected by the New Mexico health department but ignored for some 70 years shows an unusually high rate of infant mortality in New Mexico counties downwind from the explosion and raises a serious question whether or not the first victims of the first atomic explosion might have been American children. Even though the first scientifically credible warnings about the hazards of radioactive fallout from a nuclear explosion had been made by 1940, historical records indicate a fallout team was not established until less than a month before the Trinity test, a hasty effort motivated primarily by concern over legal liability.
In October 1947, a local health care provider raised an alarm about infant deaths downwind of the Trinity test, bringing it to the attention of radiation safety experts working for the US nuclear weapons program. Their response misrepresented New Mexico’s then-unpublished data on health effects. Federal and New Mexico data indicate that between 1940 and 1960, infant death rates in the area downwind of the test site steadily declined—except for 1945, when the rate sharply increased, especially in the three months following the Trinity blast. The 21 kiloton explosion occurred on a tower 100 feet from the ground and has been likened to a “dirty bomb” that cast large amounts of heavily contaminated soil and debris—containing 80 percent of the bomb’s plutonium—over thousands of square-miles. (See Figure 1.)
After a nearly half a century of denial, the US Department of Energy concluded in 2006, “the Trinity test also posed the most significant hazard of the entire Manhattan Project.”[1] Four years later the US Centers for Disease Control gave weight to this assessment by concluding:
“New Mexico residents were neither warned before the 1945 Trinity blast, informed of health hazards afterward, nor evacuated before, during, or after the test. Exposure rates in public areas from the world’s first nuclear explosion were measured at levels 10,000- times higher than currently allowed.”[2] 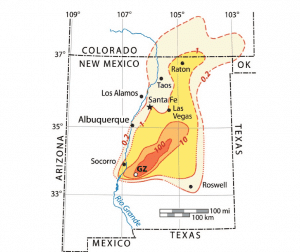 Estimated exposure rate in milliroentgens per hour (mR h-1) 12 hours after detonation; GZ = ground zero of Trinity. Source: Centers for Disease Control (2010).
Meanwhile the National Cancer Institute is conducting a study to model the dispersion and dose reconstruction for people who may have been exposed to fallout from the Trinity explosion. Regardless of the outcome of this study, it is clear the public was put in harm’s way because of US government negligence in conducting and its participation in a coverup of the results of an exceedingly dangerous experiment.
Infant mortality concerns raised about Trinity. In October 1947, the first concerns over a rise in infant mortality along the fallout path of the Trinity explosion were raised in a letter to Stafford Warren, a medical radiologist and radiation safety chief of the Manhattan Project and the Trinity test in particular. “As I recall, in August 1945, the month after the first bomb was tested in New Mexico, there were about 35 infant deaths here…” Kathryn S. Behnke, a health care provider from Roswell, New Mexico, wrote. “I understand the rate at Alamogordo, nearer the site of the test, was even higher than Roswell.”[3]
On December 4, 1947, Warren’s medical assistant, Fred A. Bryan, replied to Ms. Behnke, writing that “we can find no pertinent data concerning infant deaths; in fact there is no report as to the number of or specific cause or dates and, as far as Alamogordo is concerned.”[4]  Bryan also wrote that he “wanted to assure you that the safety and health of the people at large is not in any way endangered.”[5]
Bryan failed to mention that he did not bother to examine New Mexico’s vital statistics. About a month after Bryan’s reassured Behnke of no evidence of harm, a state health official sent the actual unpublished data on infant deaths collected by the state to Los Alamos. [6]  Soon thereafter, in a letter dated, January 22, 1948 to Bryan, Wright Langham, biomedical group leader at the Los Alamos National Laboratory (LANL), forwarded hand-written sheets from the state of “the records of infant births and deaths during 1945-1947.” Langham added: “I am sure what I am sending you will not be of much help.” The New Mexico Health Department data indicated that the infant death rate increased by 38 percent in 1945 compared to 1946 and was 57 percent higher than in 1947.[7]
Finding the facts. More than 70 years later, we examined the vital statistics collected by the US government and the state of New Mexico in the 1940s to determine if area health patterns changed after the first atomic explosion. The data eventually provided to Los Alamos and Bryan in January 1948 indicated a sharp rise in infant deaths following the Trinity explosion. Later, between 1940 and 1960, infant mortality in New Mexico showed steady and deep annual declines—except for 1945, when it shot up.[8] The infant mortality rate in New Mexico in 1945 was 100.8 per 1,000 live births; the rate for 1944 was 89.1, and for 1946 it was 78.2.[9] (See Figure 2.) The unpublished data sent to Los Alamos indicated an infant death rate nearly 34 percent higher in 1945 than subsequently made public. 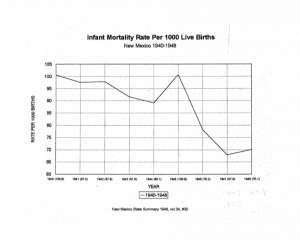 Month-by-month data for the years 1943 to 1948 revealed the highest infant mortality rates in late summer, following the Trinity blast, with a significant peak in September 1945. Infant mortality for the months August, September, and October after the explosion indicated that New Mexican infants had a 56 percent increased risk of dying, with less than a 0.0001 percent chance that this was due to natural fluctuation.[10]
In 1945, infant death rates increased on average by 21 percent (with a statistical error range of plus or minus six percent that applies to all the rates listed in this paragraph) in counties where fallout was measured by Manhattan Project personnel. Rates in these counties dropped by an average of 31 percent in 1946. The infant death rate in Roswell, where Ms. Behnke first alerted Warren of the problem, climbed by 52 percent in 1945, after falling by 27 percent between 1943 and 1944. The rate then dropped in Roswell by 56 percent in 1946.  Rates in the downwind counties where fallout was measured dropped by an average of 31 percent (plus or minus eight percent) percent in 1946
We found no extraordinary metrological conditions, such as heat or heavy rains and floods, that may have competed with radioactive fallout as a factor in the increase in newborn deaths after Trinity. According to the CDC in 2010, risks to newborns were especially heightened as “residents reported that fallout ‘snowed down’ for days after the blast, most had dairy cows and most collected rain water off their roofs for drinking.”[11]
The Trinity Test was conducted on July 16, 1945. The rate of infant mortality began rising in July. The month of August showed an infant mortality rate of 152.3 per 1,000 live births. In September, the rate was 187.8, and in October 123.1. Infant mortality change rates for August, September, and October show a dramatic increase in 1945 when compared to the same three months for the years 1943, 1944, 1946, 1947 and 1948 (see figure 3) 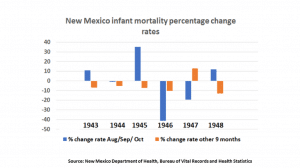