Why did US Attorney General, William Barr, the President's chief legal advisor, hold a press conference at the Department of Justice this morning, to discuss the contents of the  Mueller Report on alleged Russian State interference into the  2016 US Presidential  Election, prior to its release, even in  redacted format, to lawmakers in the US Congress and to the media ?
(https://www.nytimes.com/2019/04/18/us/politics/mueller-report.htm

The obvious answer it s the Trump Presidency  was desperate to control the narrative on the Mueller report, which despite Trump proclaiming its showed "no collusion" by his election  team with Russia, is certain to contain many nuggets of "obstruction" by the President will be found  littered throughout the report.

Below is the warning essay issued earlier today by the independent US National Security Archive on how to  understand the   widespread redactions ( ie text censuring) the Muller report  will suffer.

Washington D.C., April 18, 2019 – The National Security Archive has published hundreds of examples over the years of “dubious secrets” where U.S. government censors blacked out documents that had already been released in full – or redacted entirely different parts of the same document at different times.  This surprisingly common occurrence throws into relief how subjective the classification process is and how often agency declassifiers opt for the most sweeping rulings that wind up denying the public reasonable access to their government’s information.
The release of the redacted Mueller report today focuses new public attention on the systemic problem of over-classification and the routine overuse of exemptions to the Freedom of Information Act that are supposed to be reserved for protecting true secrets. (See for instance this week’s AP story in the Washington Post and the feature on PRI's "The World.")
Included in today’s posting is a famous precursor of the Mueller document – the outside consultant’s report from 2002 on racial discrimination within the Justice Department, which Justice’s own experts on information policy redacted in completely unjustified ways, a fact that could be confirmed only after the accidental removal of the electronic veils over deleted portions of the document.
Also in today’s e-book are a number of classic examples of U.S. government over-zealousness in applying a figurative Magic Marker to information that was already public or should be public.

1
Message from Chairman Khrushchev to President Kennedy, October 27, 1962
Soviet Premier Nikita Khrushchev advanced the proposal to remove American missiles from Turkey at the height of the Cuban Missile Crisis.  Despite the notation in the document on the left that Khrushchev's message had been public, reviewers decades later blacked out the missiles' location. 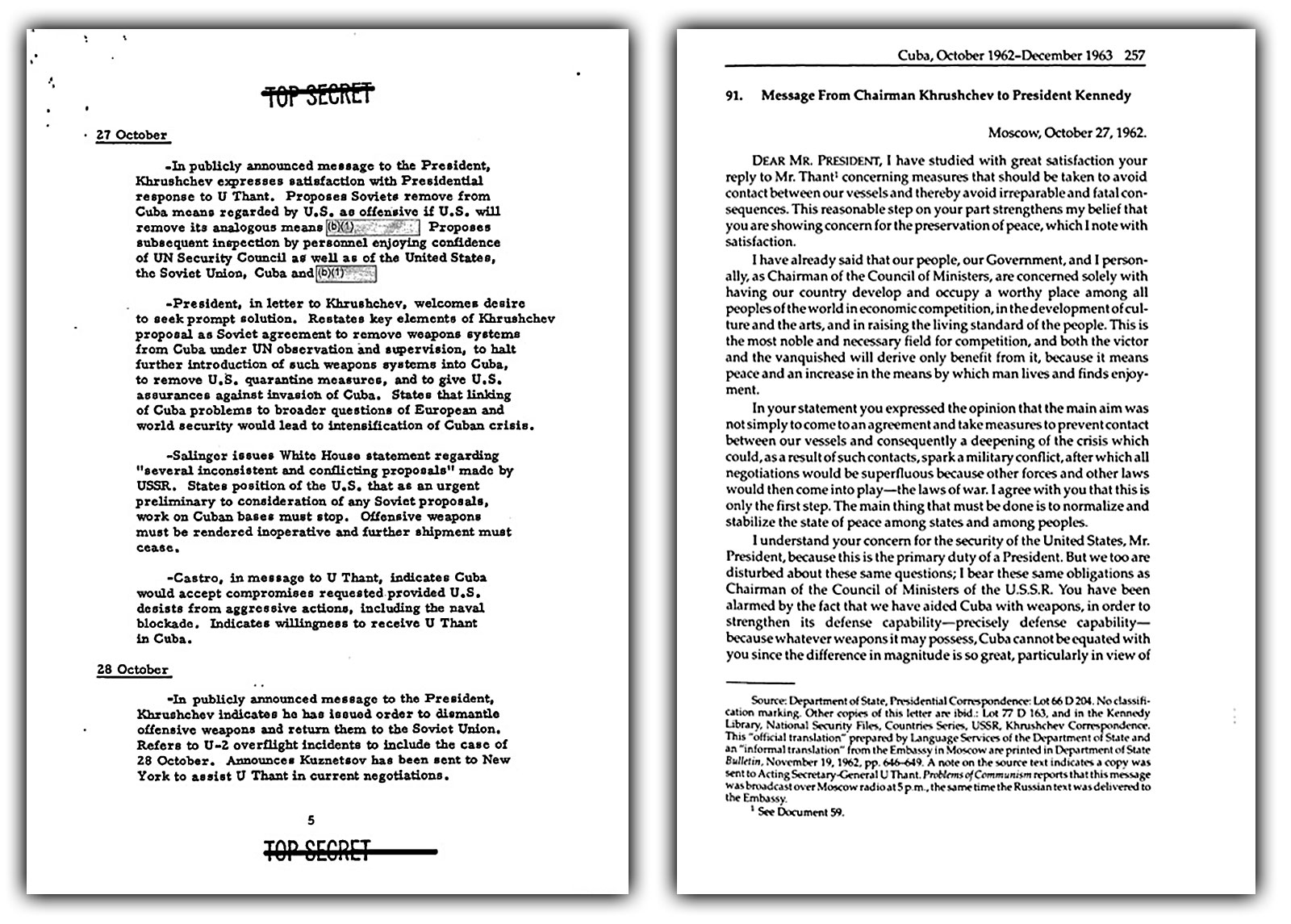 2
“Summary of the Existing Plans for Emergency Use of Nuclear Weapons,” September 23, 1964
This memo for President Lyndon B. Johnson covers the predelegation of authority to launch nuclear weapons.

3
Biographic Data: Gen Augusto Pinochet Ugarte, January 1975
A Defense Intelligence Agency bio sketch describes the Chilean dictator. The full version on the left came out in 1999, but censors decided in 2003 (right) to excise his preference for Pisco Sours, among other information.

4
Special National Intelligence Estimate (SNIE 11-10-84), "Implications of Recent Soviet Military-Political Activities," May 18, 1984
The SNIE appears on the left while the State Department memo on the right partially reproduces its text, albeit in redacted form. 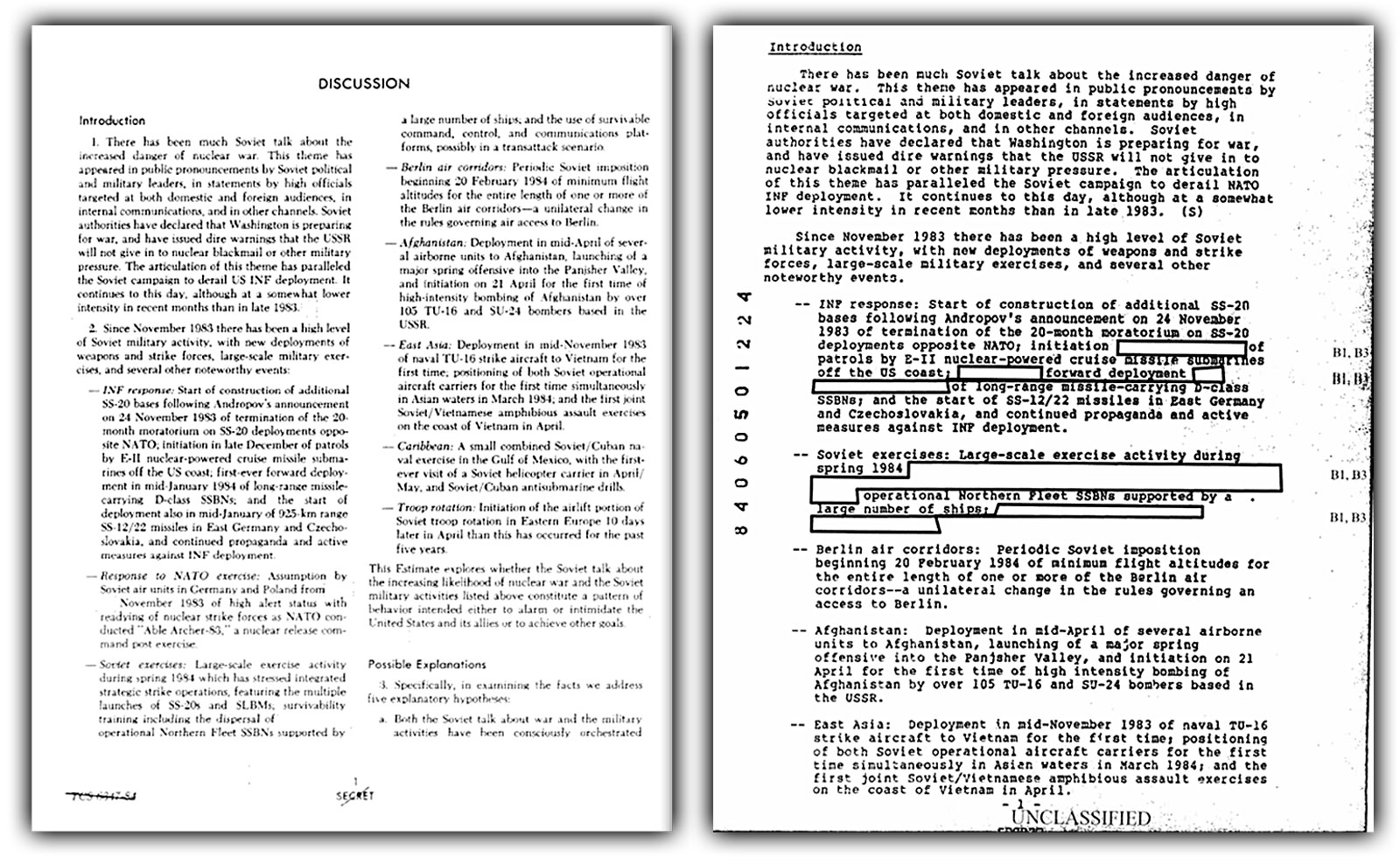 5
Memorandum for the Deputy Secretary of Defense, “Draft of Revised NSDD 32,” July 14, 1986
This Joint Staff memo concerns a revised National Security Decision Directive​ on U.S. strategy toward the Soviet Union. The version on the left was released in 2016 but contains heavy redactions that reviewers did not consider necessary in 2010 when they declassified the version on the right in full. 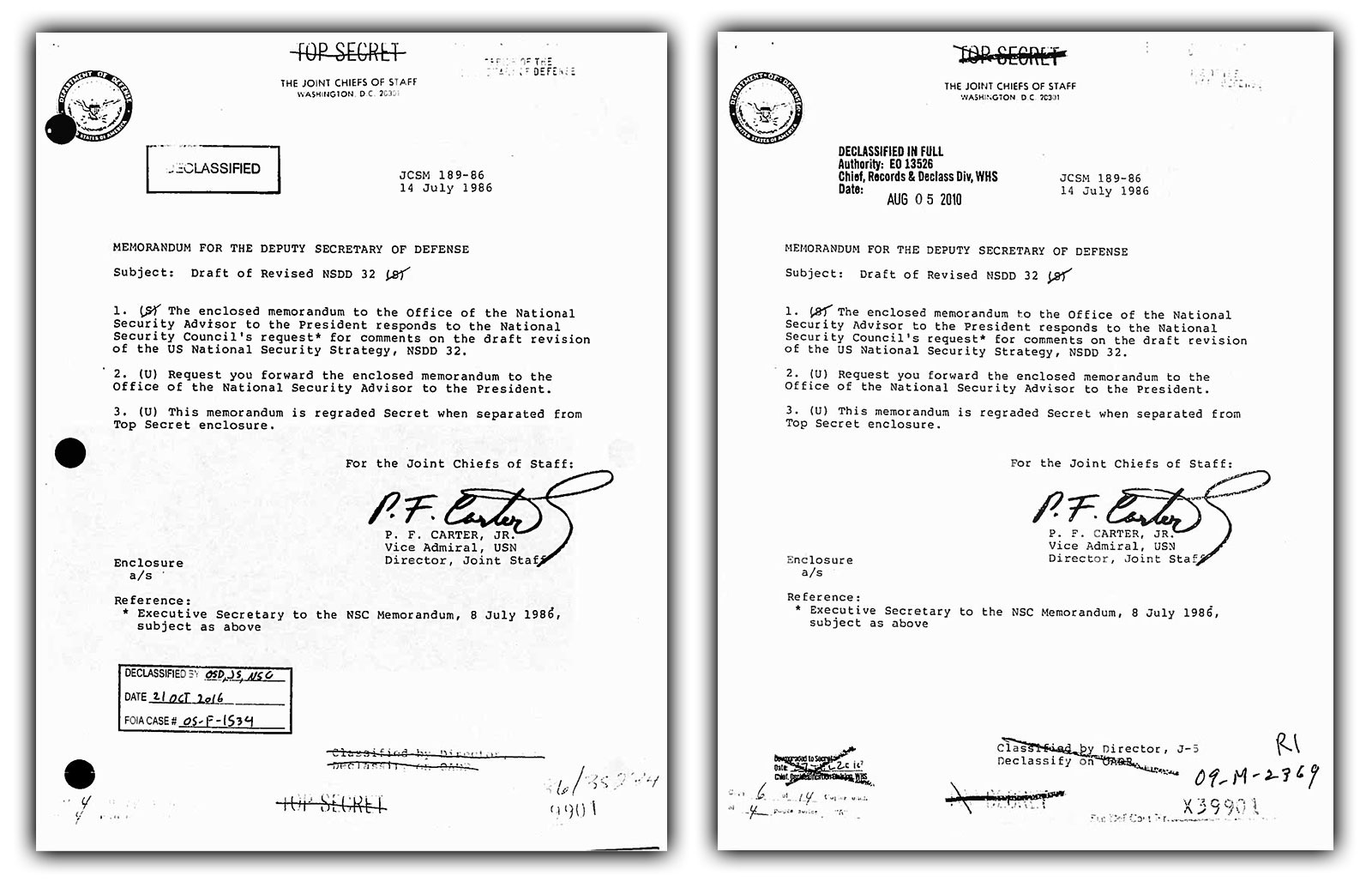 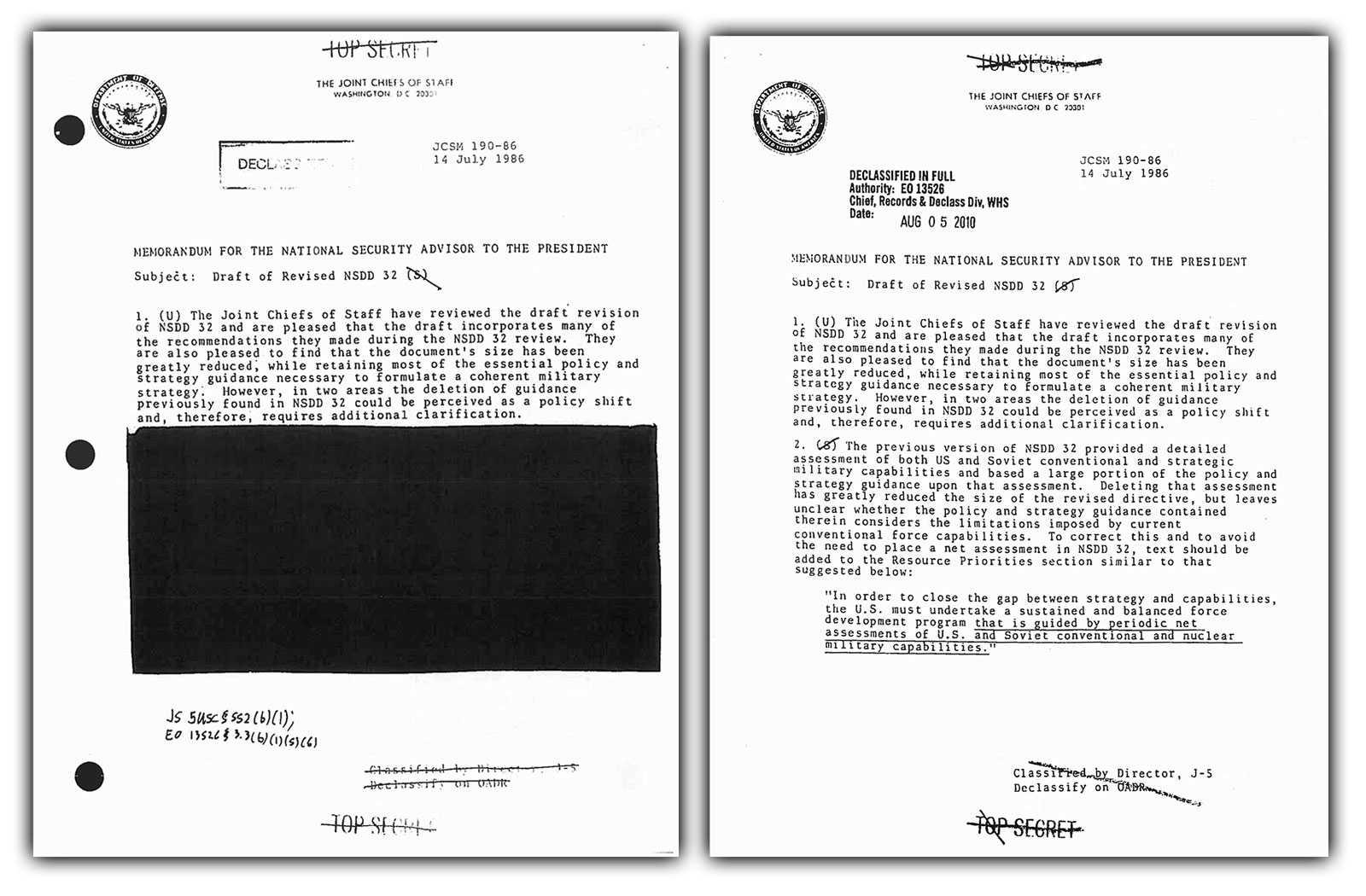 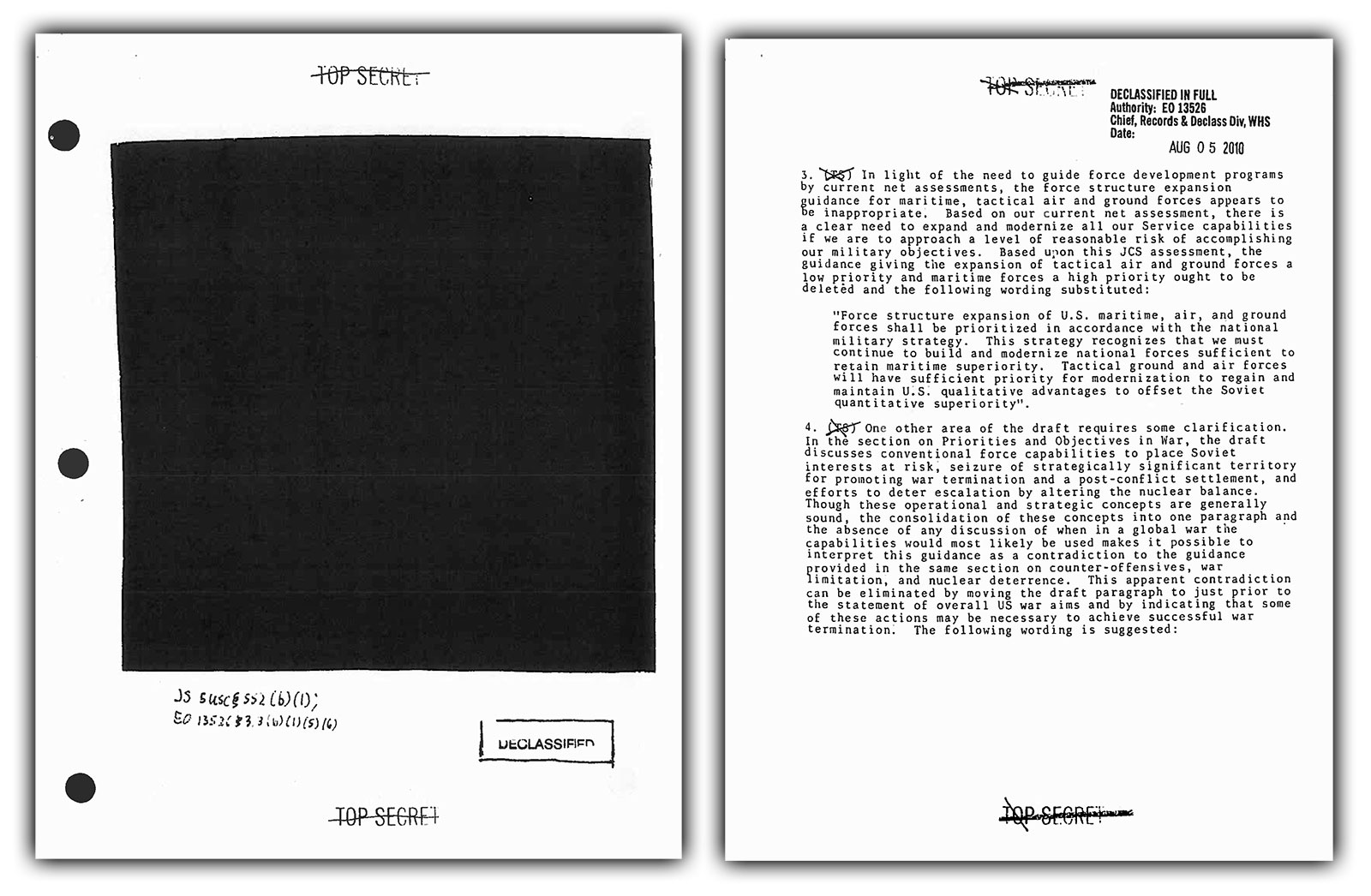 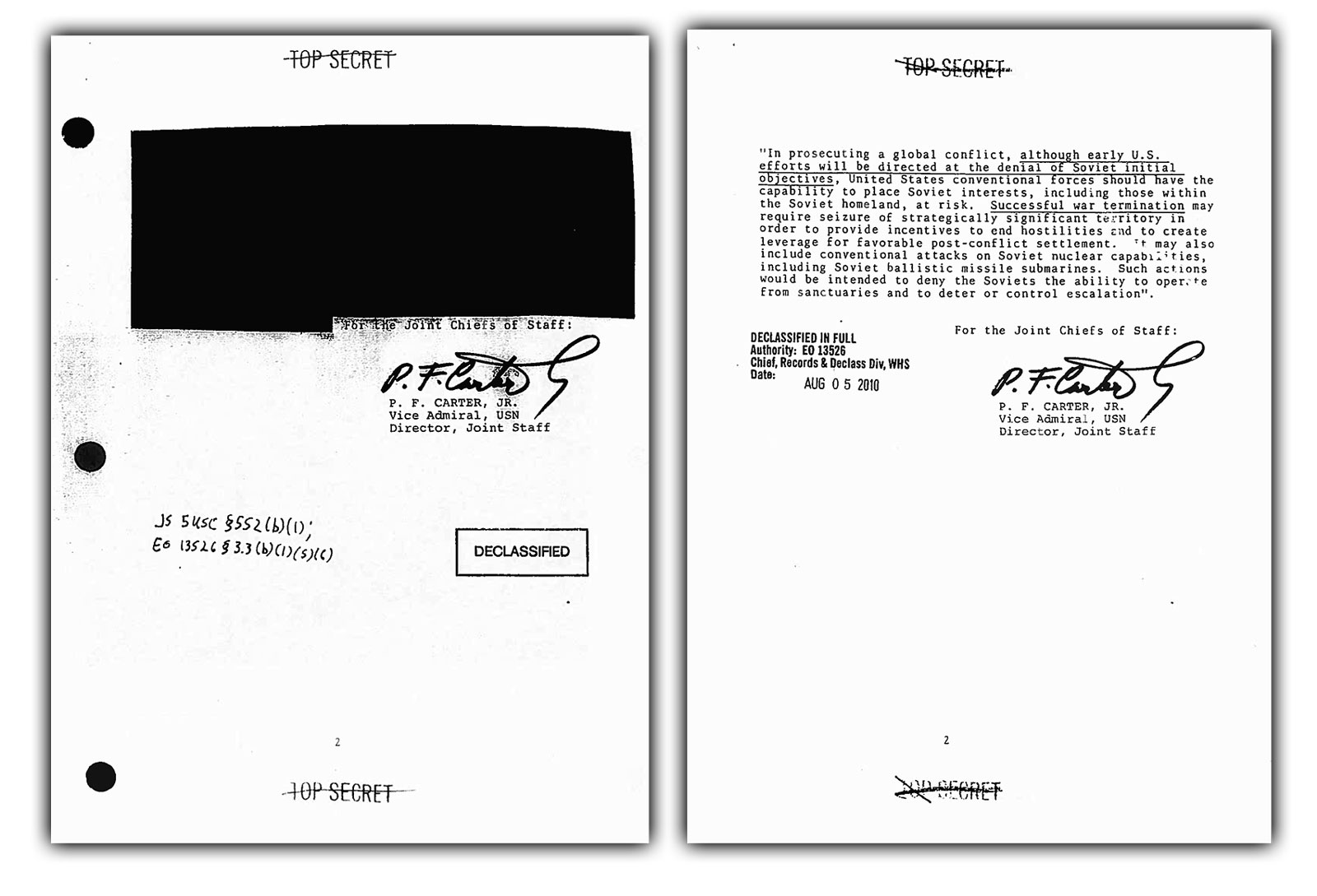 6
White House e-mail message from William A. Cockell to Deputy National Security Advisor Colin Powell, Subject: "Iran-Iraq," January 21, 1987
This early White House electronic message was reviewed for release twice within weeks by the same NSC staff official.  He classified the deletions each time at the Secret level, meaning he concluded their release would cause "serious damage" to U.S. national security. 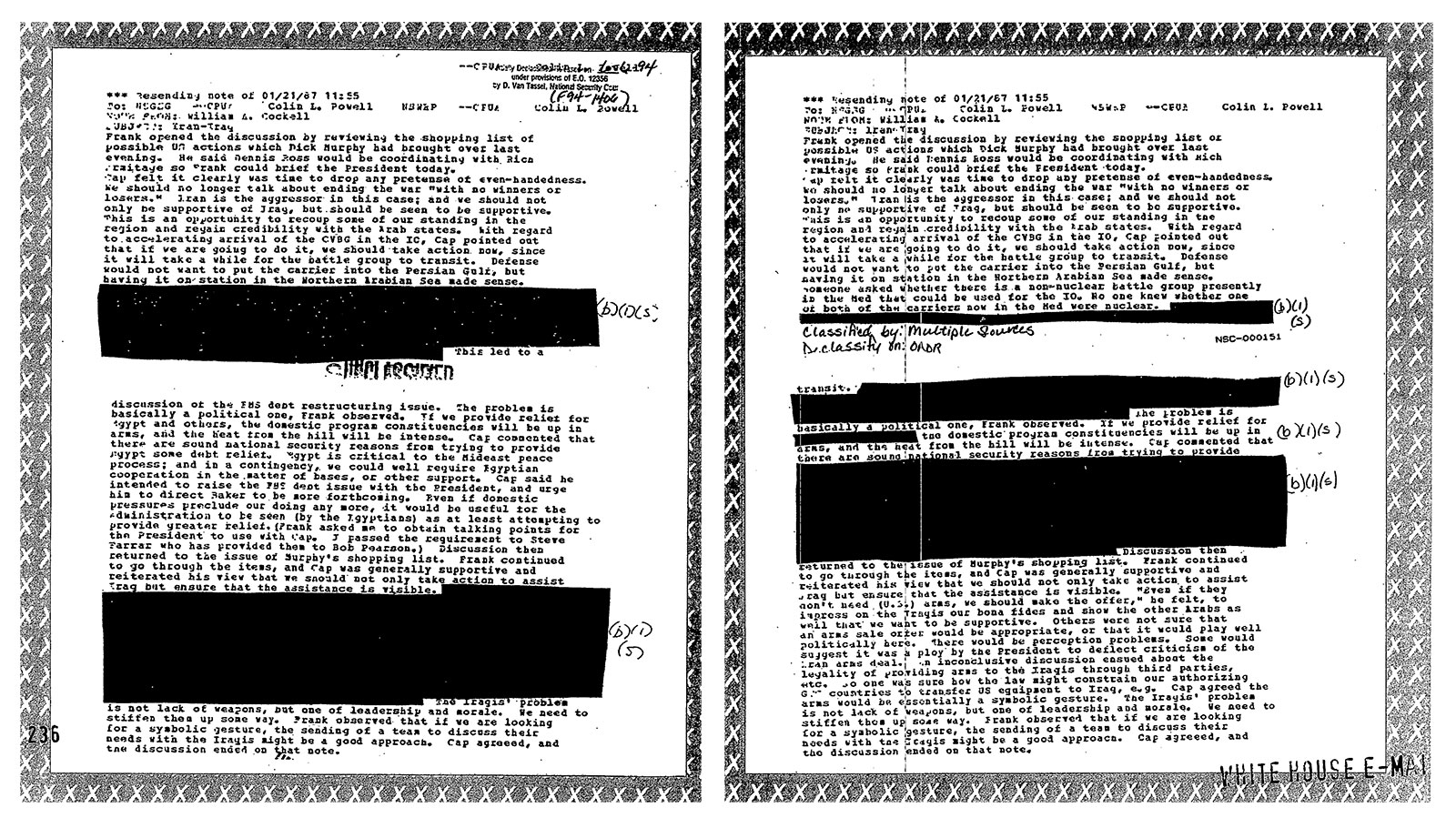 7
State Department, Bureau of Intelligence and Research, Memorandum, “Rwanda – Geneva Convention Violations,” May 18, 1984
This memo discusses whether the mass killings in Rwanda amounted to genocide. Four separate reviewers over a 12-year period came to different conclusions as to what could safely be declassified.

State Department 2003 version
The first re-review of the document took place in 2003, when the State Department (reviewer Charles Daris) released a new version of the document, omitting the final paragraph for "national security reasons (B1)" [the first exemption to the U.S. Freedom of Information Act]. The paragraph in question has no identifiable U.S. national security information.
State Department 2007 version
Another State Department official (Herman Kirby) re-reviewed the document in 2007. He released the paragraph withdrawn in 2003, but redacted a section on the first page, expressing doubts about the size of the Rwandan death toll, as "privileged intra agency communication" (B5) [the fifth exemption to the FOIA].
Clinton Library 2012 version
In 2012, the Clinton Presidential Library released a fourth version of the document, restoring the redacted section on the first page, but deleting the final paragraph for "national security reasons."
National Security Archive 2001 version
A reading of the unredacted document released in 2001 demonstrates the spuriousness of the "national security" and "privileged intra agency communication" redactions. The last three re-reviews of the same document are clearly superfluous and a waste of taxpayer money. Sadly, this is typical of what happens to many documents, despite repeated Obama administration pledges to improve the declassification process.

8
KPMG Consulting, Final Report to Department of Justice, “Support for the Department in Conducting an Analysis of Diversity in the Attorney Workforce,” June 14, 2002
A Justice Department information official blacked out large portions of this outside consultant's report concerning problems of racial diversity within the department.  The version on the right indicates in yellow what lay under the veil. 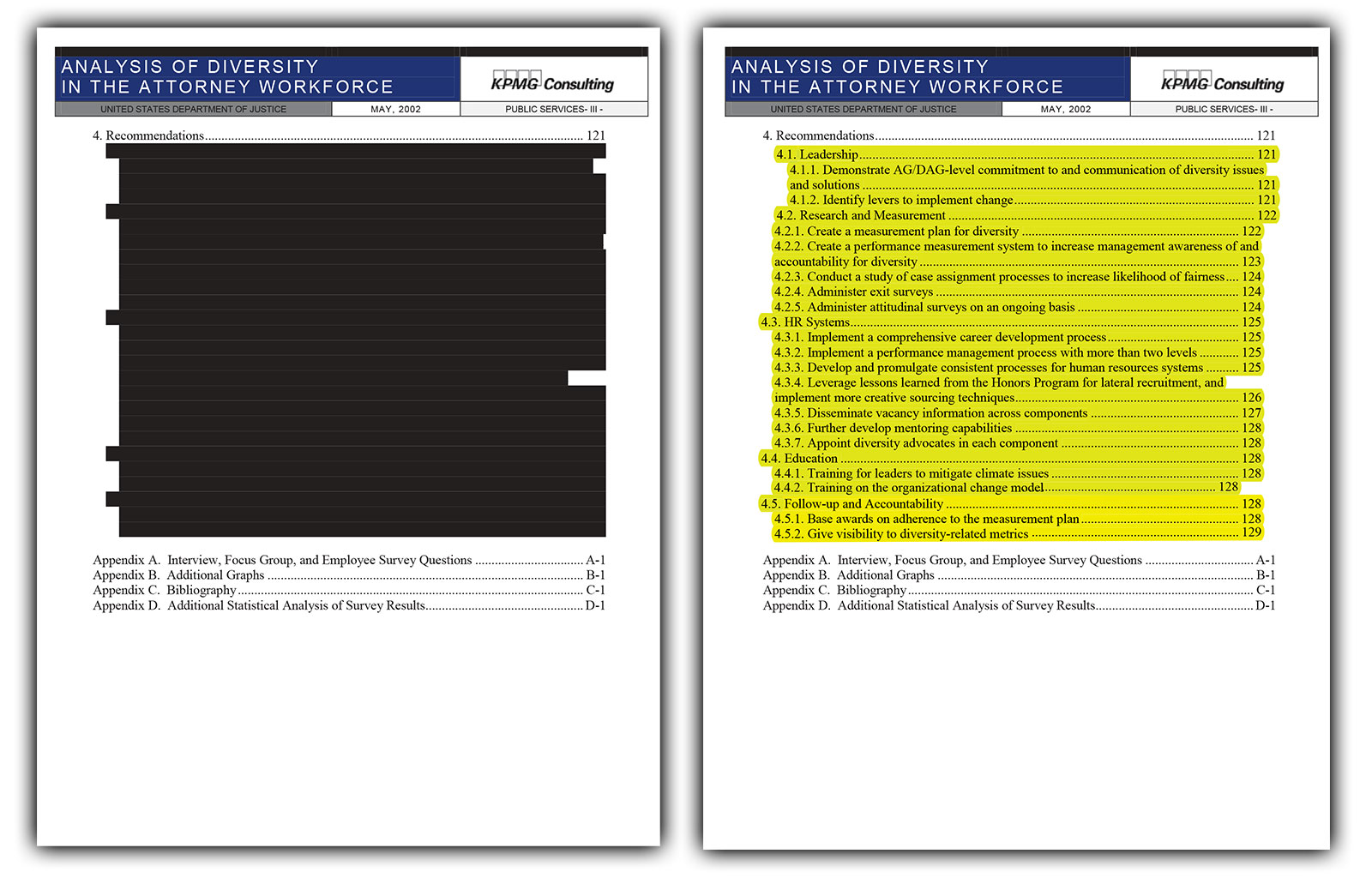 9
Excerpt from CIA Inspector General’s report on "Counterterrorism Detention and Interrogation Activities (September 2001 – October 2003)," May 7, 2004
The version of this lengthy report released by the Obama administration in 2009 (right) reveals a great deal more about CIA interrogators' illicit practices than the version put out by the Bush administration in 2008.